On November 8, 2019, three NAMUR Awards for outstanding dissertations and master theses were presented at the NAMUR Annual General Meeting. 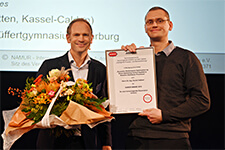 Dr. Ing. Daniel Haßkerl received the award for his dissertation "Economic Performance Optimization by Direct Optimizing Control Applied to Reactive Distillation Processes". The work was carried out at the Faculty of Biochemical and Chemical Engineering of the Technical University of Dortmund. Sebastian Engell supervised.

Today, an important aspect of process control is the economically motivated optimization, for example, to increase throughput or profit. This is also referred to as "Economic MPC" or "Direct Optimizing Control".
In his work, however, Mr. Haßkerl has for the first time dealt with the economic real-time optimization of a complex process, a reactive rectification. He succeeded in demonstrating that on-line optimizations of complex processes with nonlinear model predictive control (NMPC) are possible. 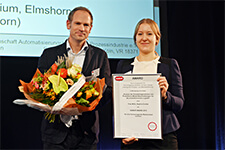 The master thesis "Analysis of the potential uses of production module descriptions for production-related logistics" by Ms Sophia Cordes was also awarded the NAMUR-Award. The work was created at the Institute for Automation Technology of the Helmut-Schmidt-University / University of the Federal Armed Forces Hamburg. Supervised Alexander Fay.

As part of her Master’s thesis, Ms. Cordes dealt with the question of whether the module type package (MTP) can be used in the modularization of production-related logistics in order to automate logistics systems according to the plug-and-operate principle and whether an automation solution integrated with the production can also be implemented here.
The hypothesis that the “NAMUR-MTP state machine” can be used for the process control of a modular plant in production-oriented logistics of the process industry was confirmed in her master thesis in a simulation of horizontal and vertical communication.

In his master's thesis, Mr. Markaj has dealt with the availability of process plants using a holistic approach that takes account of the failure behavior of the components, allows systematic links between modeling and external data sources, and enables both quantitative comparability of maintenance measures and assessments of system availability.
Reliability and thus system availability play an enormous role in the manufacturing industry and are therefore already an important factor in the early stages of engineering, since here, future costs can be influenced the most in the overall life cycle of the plant.

The NAMUR congratulates the winners. 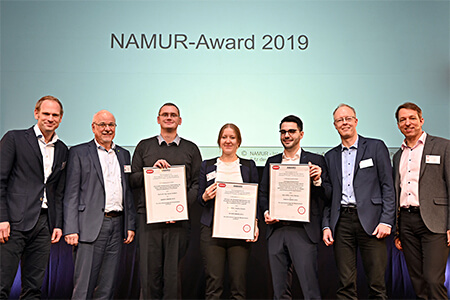 NAMUR annually awards the NAMUR Award for outstanding scientific theses (diploma / master and doctorate) at universities and universities in the field of intelligent process and operational management.
The award is endowed with a prize money of 1,000 euros for a diploma / master thesis and 2,000 euros for a doctoral thesis.
In addition, NAMUR will each award € 2,500 to the supervising chairs of the winners for use in promoting the next generation in process automation.